Our product line can offer discrete signals in the form of relays or opto-couplers. These signals are generated internally by the onboard microcontroller but can be shown functionally using the simplified schematic below in Figure 1.   Comparators U1 and U2 are used to sense the amplitude of the signal, for instance battery voltage, and determine if it is within or out of a desired range.  The outputs of the comparators are input to a decision block, in this case an OR-gate, U3.  The gate output can then drive a relay or opto coupler as shown in Figure 2.

The decision block can be an OR gate or any other logic gate or series of gates programmed by the microcontroller.  The microcontroller can generate an infinite number of logic combinations to satisfy virtually any requirement.

Relays are chosen when a substantial amount of current and voltage is required to be switched upon some event occurring.  Optos are employed when interfacing to other digital circuitry which require a pull-up or pull down function or currents amplitude are less than 10 mA/30V. 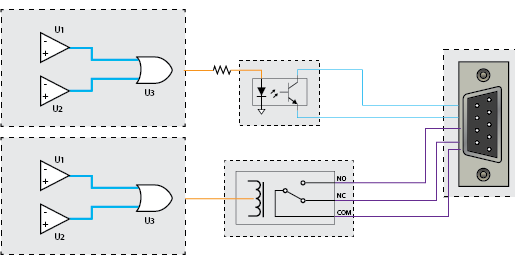 SMBus is electrically based on the I2C specification with changes and additions for parameters such as timeouts, changes in signal threshold levels, minimum bus speed, etc.

I2C uses a single ended clock and data line shared among all devices on the bus. This protocol allows for master and slave devices, the data (SDA) and clock (SCL) signals are open collector at the devices, pull-up resistors for each signal are placed on the bus. This results in an active ‘0’ state and passive ‘1’ state for both signals. This done to allow for bus arbitration between multiple masters and to allow wait states to asserted by slave devices to slow down the rate of data transfers. All data transfers are performed as 8-bit bytes.

The SMBus master device controls data transfers, multiple masters are allowed. A data transfer consists of a start condition exerted by the master, followed by the 7-bit address of the slave device plus one bit to indicate if the transaction will be a read or write, on the next clock following the address and read/write bit the master looks for an active low acknowledgement bit exerted by the addressed slave. If acknowledged the master continues with reading or writing of data. Each following data byte read or written is acknowledged by the receiving device. The transfer is completed by the master exerting a stop condition. The basic timing is shown below, this is a simple example of a master sending a slave address where there is no acknowledgement, requiring the Master to exert the stop condition to end the transfer.

Based on a standard: The SMBus standard defines the complete message protocol require to communion between devices. RS-232 and RS-485 only define electrical characteristics.

Below is a SMB transaction to read one byte of data based on a SMBus command, S=Start, A=Acknowledge, P=Stop.

A number of SMBus commands are defined, a partial list is shown below:

Noise sensitive: I2C was originally designed to connect devices on the same PCB, however has been SMBus is used to connect via a cable to device external to a PCB resulting in noise pickup issues. The protocol allows for CRCs to be added to the message, detected errors than can initiate retransmissions, however not all devices implement this portion of the specification.

Number of device: Although SMBus, like I2C, is multi drop, allowing for multiple device, in general the number of devices is limited by the bus capacitance which increases with cable length. However, in general SMBus is used with a master and only a few devices sharing the bus so this is not normally an issue.

Speed: SMBus is limited to a 100 kHz bus speed but the actual rate of data transfer will be lower due to interface and protocol overhead.

As discussed, RS-232, RS-485 and SMBus require common ground references, but sometimes references are made to isolated forms of these interfaces, most commonly with RS-485. These isolated interfaces reference electrically isolating the transmitter and receiver at the device from device electronics, however all the interface devices on the communication bus still require a common signal reference among these selves and this may require an additional dedicated power source for the interface.

In large volumes the cost of providing an RS-232, RS-485 or SMBus interface is not significantly different from each other, however in low volumes requirements for custom message protocols for RS-232 or RS-485 may have a slight effect on unit cost.

While many wireless communication options are available, Wi-Fi has become standard for wireless embedded systems. Wi-Fi allows access and control of devices spread over a large area and is well understood in terms of infrastructure and setup.

There are almost unlimited capabilities for adding connectivity over Wi-Fi and while the short-term start-up costs may be high, the long term benefits can lower overall costs. The startup costs would include development of smartphone or laptop applications for connectivity, allowing mobile workers to access applications on the go, increasing efficiency and providing accurate results using fewer personnel.

Scalability: A PC/laptop/smartphone can easily host multiple networks at the same time without additional hardware, the serial interfaces mentioned earlier require dedicated hardware for each network hosted and there are generally limits on the number of interfaces that can be supported.

Infrastructure cost vs. wired networks: Installation of wireless connected devices is up to 10 times cheaper than the wired alterative along with quicker network startup times. There are no costs for the planning required to route wire back to junction boxes or control rooms.

Data Integrity: Packet protocol acknowledgment is supported by error checking as part of the Wi-Fi protocol. Error checking is designed to ensure that Wi-Fi is not forwarded until it is acknowledged as a correct transmission to guarantee that what is received is identical to what is sent.

Privacy and Security (over the WAN/Interface): If access is needed outside a private network then devices must be connected to the internet. Steps must be taken to prevent unwanted parties from controlling the devices or viewing data. This can be in the form of VPNs (additional infrastructure costs) or encryption (additional complexity and device costs).

Cost at the device level: While many PCs have built-in Wi-Fi, adding this capability to network elements is much more costly than the serial interface protocols. Also a network infrastructure is needed and if not already in place this results in additional costs. Depending on the protocol used and the security required, the cost for the devices can escalate further to support additional processing requirements that may be need for encrypted protocols.

Complexity: Due to increases in complexity there are more opportunities of failure. If the infrastructure to support Wi-Fi does not exist in the network it must be added along with trained support personnel.

Compatibility: While control and monitoring functions can be implemented via HTTP or SMTP, this does not fit the need of many users. In these cases custom protocol must be implemented, increasing the startup costs, but lower the longer-term costs as these devices become fully integrated into the existing systems.

PMBus, like SMBus, is based on I2C and has the same characteristics, advantage and disadvantages with respect to the physical interface with some minor differences. PMBus can operate at 400 kHz vs the SMbus 100kHz limit and PMBus allows for transfers of larger blocks of data.

PMBus is an open standard and is optimized for communications and operability between power systems such as power controllers, power supplies, converters, etc. The command structure offers a larger variety of operations than SMBus and include capabilities for controlling and monitoring fans, voltage and current modes, temperature monitoring, load monitoring, voltage control, current control. Etc.

CAN Bus is an open standard allowing node controllers to communicate to each other over a common message based serial bus. It was originally and still primarily used for vehicles but has gradually moved into other applications

CAN is multi-master, each node is required to monitor the serial bus and act on messages of interest. A CAN node can also be a gateway, most commonly this capability is used to connect portions of distant CAN buses over Ethernet.

All nodes on the bus are connected to each other through 120 Ω twisted pair wires. Every node must operate at the same nominal bit rate, up to a maximum of 1 Mbs for short distant networks (<40 meter). Since a separate clock signal is not used, nodes must synchronize to the message being transmitted, this allows for slight variations in oscillator timing between nodes. The CAN specification defines how synchronization is performed as well as definition of the CAN message frame and fields, bus arbitration and error detection. Messages are distinguished by message identifiers. The identifier is unique to the network and defines the content and priority of the message. The content of the message is not defined by the CAN specification but there are a number of industry standard specifications defining the higher level protocols such as node addressing, flow control, transport of large data blocks and application data.

A CAN standard message frame is shown below:

Data – 0 to eight bytes of data

Robust: The messages contain CRCs and the physical interface is robust allowing for good noise immunity and operation even with failure of one of the twisted pair signals.

Low cost hardware: The only comports need to attach is CAN transceiver and a controller capable of processing CAN data frames.

Built-in Broadcast and message priority: Since all nodes see all messages it is easy to implement broadcast messages that can be sourced by any mode. The bus definition allows prioritization of messages.

Isolation: CAN bus nodes can be isolated, this is relatively straight forward and the CAN bus specifies +5V be provided to the bus side of the interface.

Bus efficiency: There is a lot of overhead in the message format considering only a maximum of 8 data bytes can be transferred per frame.

Bus speed: All nodes must operate at the same speed. 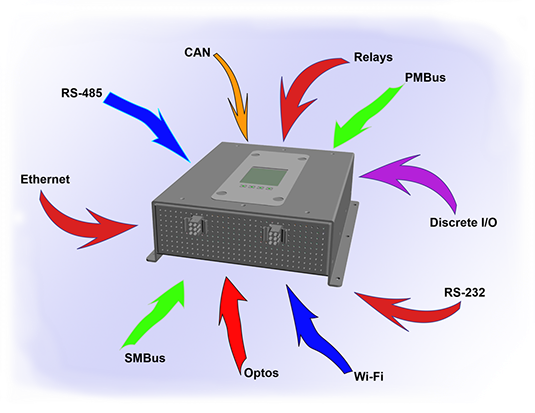